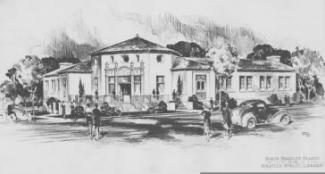 For more history of this branch, see the "Berkeley--Public Library--North Branch" clipping file located in the Berkeley History Room.

1910-1915: North Branch opened in 1910 and existed for 5 years above a drug store located at Shattuck Avenue and Vine Street.

1916-1936: North was relocated to the lower level of the Penniman House located at 1301 Shattuck Avenue in the Live Oak Park area.

1936-2011: Berkeley once again turned to local architect James Plachek to design a new North Branch located at The Alameda and Hopkins Street.  This building, plans for which had to be scaled back to save money, cost $45,000, including $16,000 of matching funds from the WPA (Works Progress Administration).

2011-Present: With the passage of Measure FF, North Branch was sensitively restored and modernized.  The addition included the middle wing jutting off the main lobby as first envisioned by the original architect, James Plachek, plus a community meeting room, a significantly expanded teen space, and an expanded staff work space.