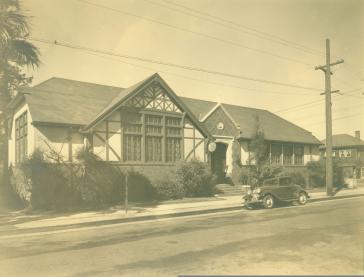 Claremont Branch viewed from Benvenue c. 1925.  This building was designed by James Plachek, who went on to design the Central Branch.

In 1975 a neighboring house immediately to the south of Claremont Branch was purchased, then sold and removed a few blocks away to make way for a significant addition to be added to Claremont.  The addition was completed in 1976 at a cost of $213,000.

For more history of this branch, see the "Berkeley--Public Library--Claremont Branch" clipping file located in the Berkeley History Room.

1909-1917: Claremont Branch was opened in 1909, and was originally located in Emerson School on Piedmont & Forest Avenues.

1924-2011: Opening in November 1924, the core of the current building located at 2040 Benvenue was built for $24,000 and designed by James Plachek.  In 1975-1976 a significant addition was constructed in what was a neighboring residential lot (once the house occupying the lot was sold for $1.00 and removed a short distance away).  This addition included a new children's wing and community space, and was designed by Ratcliff, Slama & Cadwalader, costing $213,000.