The Berkeley Public Library, in conjunction with the Berkeley Public Library Foundation and the Harry Weininger Family, invite you to join us for a special evening on October 17, 2012, with a reception from 6:00 pm to 6:45 pm and the featured event from 7:00 pm to 8:00 pm. Author Michael Lewis will discuss his recent article in Vanity Fair Magazine’s October 2012 issue about his six months embedded with President Obama titled, “Obama’s Way”. Mr. Lewis will be featured in conversation with Linda Schacht Gage. This free event will be held at the Central Branch of the Berkeley Public Library at: 2090 Kittredge Street in Berkeley.  Due to the space limitations, tickets will be required for entry and will be limited to two tickets per person. The free-of-charge tickets can be obtained via:

After reserving a ticket on-line please plan to pick up your will-call ticket the day of the event between 5:00 pm and 6:30 pm at the Central Library.  Day of the event seating will be on a first come basis with availability depending on the number of non-reserved seats remaining. “Michael Lewis has been a staunch supporter of our local libraries for years,” said Linda Schacht Gage, Capital Campaign Chairmen for the Neighborhood Libraries Campaign. “After reading the Vanity Fair piece, I had so many questions I wanted to ask Michael. Now I get to do it and you get to be there! We are so grateful to Michael for agreeing to help the library once again.” Michael Lewis is an American non-fiction author and financial journalist. His bestselling books include The Big Short: Inside the Doomsday Machine, Liar’s Poker, The New New Thing, Moneyball: The Art of Winning an Unfair Game, The Blind Side: Evolution of a Game, Panic, Home Game: An Accidental Guide to Fatherhood and Boomerang. Lewis has worked for The New York Times Magazine, as a columnist for Bloomberg, as a frequent contributor to The New Republic, and a visiting fellow at the University of California, Berkeley. He has been a contributing editor to Vanity Fair since 2009. Linda Schacht Gage is an Emmy award winning television reporter with more than 20 years’ experience in local television. Her career began at KQED-TV on the highly regarded Newsroom nightly news show. She covered politics, locally and nationally, for KPIX, the CBS owned and operated station in San Francisco, for nineteen years. Linda has won two Emmy awards and an American Bar Association national award for her political coverage. She has been on the faculty of UC Berkeley since 1992 and has served on the Boards of the Berkeley Public Library Foundation, the UC Library Advisory Board, the Berkeley Symphony Orchestra, The Daily Californian, and the UC Board of Trustees. This event is underwritten by the Berkeley Public Library Foundation, through the generosity of the Harry Weininger Family. The Harry Weininger Family celebrates the life and generosity of Harry Weininger, who was a well-known figure in the Berkeley community and a long time supporter of the Berkeley Public Library. Harry was involved in a number of community organizations and played a peace-making role in the city's political scene. He served for many years on the board of directors of the Berkeley Democratic Club and was the club's president in 1983 and 1986. Mr. Weininger was always interested in the law and received a law degree from the University of San Francisco in 1988 when he was 54, then volunteered his legal services through the Berkeley Public Library’s Lawyer in the Library program. This event represents the First Annual Author Event to be sponsored as a memorial by the Weininger Family. The Berkeley Public Library Foundation supports the renovation of each of our neighborhood branch libraries, with the goal of ensuring that all Berkeley community members have access to knowledge and learning by enhancing library facilities, programs and services. To find out more about this event, or link to the Vanity Fair article, “Obama’s Way,” as well as how you can contribute to the improvements at the neighborhood library branches, please contact the Berkeley Public Library Foundation at: info@bplf.org, by calling 510.981.6115, or simply visit us at www.bplf.org! Please join us for this memorable, “Only in Berkeley” event. The Central Library is open Monday, noon-8 pm., Tuesday, 10 am - 8 pm., Wednesday through Saturday, 10 am until 6 pm, and Sunday afternoons from 1 pm till 5 pm. For questions regarding this program and accessibility information, call 510-981-6195, TDD 510-548-1240, http://www.berkeleypubliclibrary.org. Wheelchair accessible. To request a sign language interpreter or other accommodations for this event, please call (510) 981-6195 (voice) or (510) 548-1240 (TTY); at least three working days in advance to ensure availability. Michael Lewis Event Flyer

Get ready for Halloween at the Berkeley Public Library! “The Mysterious Stranger: stories and poems of Edgar Allan Poe” features celebrated Bay Area actor Robert Sicular. Mr. Sicular brings his unique and profound interpretation of Poe’s chilling, evocative work to life in a one hour performance intended for ages ten and up. There will be two free performances of this special event: Tuesday, October 16, 2012, at 6:30 p.m. at the Central Library, 2090 Kittredge (at Shattuck), in the 3rd floor Community Meeting Room. The following week, the show travels to the North Branch, 1170 The Alameda (at Hopkins), on Wednesday, October 24, at 6:30 p.m. Mr. Sicular has performed at ACT (where for years he appeared as Marley's Ghost in "A Christmas Carol"); the Oregon, California and San Francisco Shakespeare Festivals; Berkeley Rep, San Jose Rep, Marin Theatre Company, and many other theaters locally and across the country.  Renowned for his interpretations of the classics, he has appeared in over 80 productions of Shakespeare’s plays, portraying such roles as Hamlet, Richard II, Petruchio, Marc Antony, Malvolio, and the melancholy Jaques. He will soon be seen in the role of Dad in Josh Kornbluth’s upcoming film Love and Taxes, and stars as Dr. Dark in the web series, Dr. Dark Presents, coming soon. For questions regarding this program, call 510-981-6241.  This program is sponsored by Friends of the Berkeley Public Library (www.berkeleylibraryfriends.org).  For accessibility information, call 510-981-6195, TTY (510) 528-1240, http://berkeleypubliclibrary.org.

Soul Calling: ­­A Photographic Journey Through The Hmong Diaspora, Slideshow and Booktalk Event

SOUL­ CALLING: ­­A Photographic Journey Through The Hmong Diaspora, a new book presented with a free slideshow by author and award-winning photographer Joel Pickford at the Berkeley Public Library.­ Special guest presentation of HOLGA photography works by Banteay Srei, an organization dedicated to supporting young Southeast Asian women impacted by sexual exploitation. This free program will be held Saturday, October 6th, 2012 at 2:00pm in the 3rd floor Community Meeting Room of the Central Branch of the Berkeley Public Library, 2090 Kittredge St., Berkeley. 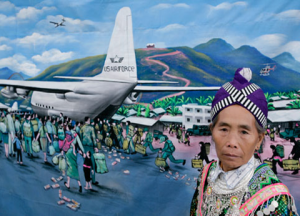 From the rice harvests and funerals of remote Hmong villages in the mountains of Laos to the shamanic ceremonies and overflowing apartment-complex vegetable gardens of Hmong Americans living in Fresno, writer and photographer Joel Pickford leads us into a world of deep-rooted custom and the harsh realities of cultural adaptation. His exquisite photographs and intimate stories take us into living rooms and through the memories of a remarkable people, so recently displaced from their traditional homeland by the traumas of the Vietnam War. Joel Pickford is an award-winning photographer, filmmaker, and author born and raised in California’s San Joaquin Valley. His work can be seen at the Los Angeles County Museum of Art, the Portland Art Museum, the Fresno Art Museum, among other collections. His documentary films have been broadcast on PBS stations throughout the country. In 2005, Joel received grants from the California Council for the Humanities and the James Irvine Foundation to document the Hmong refugee culture of Central California and Northern Laos. He holds an interdisciplinary master’s degree in Documentary Studies and Southeast Asian Studies at California State University, Fresno. His scholarly research also includes ethnographic fieldwork on the Laotian language and culture. Banteay Srei, based in Oakland, CA, works with young Southeast Asian women at risk for sexual exploitation. It provides social support, healing arts, reproductive health education, life skills-building, and leadership development. For more information go to http://www.girlsempoweringthemselves.com/pages/index2.html. Eastwind Books of Berkeley will provide books for sale at the event.  Portion of book sales will be donated to Banteay Srei (Bahn-tea-ay Suh-ray) *, a non-profit Asian Health Center project in Oakland. The Central Library is open Monday, noon-8 p.m., Tuesday, 10 a.m.-8 p.m., Wednesday through Saturday, 10 a.m.-6 p.m., and Sunday afternoons from 1 p.m.-5 p.m.  For questions and accessibility information, call 510-981-6195, TTY 510-548-1240, http://www.berkeleypubliclibrary.org.

Berkeley Public Library is committed to developing collections, resources, and services that meet the cultural, informational, recreational, and educational needs of Berkeley's diverse, multi-cultural community.  Our website (http://www.berkeleypubliclibrary.org/) is one of the most important ways we have to communicate with our users. Berkeley Public Library is soliciting proposals from qualified firms or individuals for Website Redesign and Web Content Management System (CMS) Implementation for the library’s website. The selected firm will develop a user friendly website which can deliver a large volume of frequently changing content to our key audiences. The library will maintain ultimate editorial control of content and will be responsible for publishing new information on the website. The Request for Proposal (Specification No. 13-10694) and details on how to submit a proposal can be found at: http://www.cityofberkeley.info/ContentDisplay.aspx?id=7128. Proposals must be received no later than 2:00 P.M., on Tuesday, October 9, 2012.  All responses must be in a sealed envelope and have “Library Website Redesign and Content Management System Implementation” and “Specification No. 13-10694” clearly marked on the outer most mailing envelope. We are excited to be launching a process that will result in a new website design to better serve the community and showcase our services and resources. We look forward to launching the new state-of-the-art website in 2013.

September is Library Card Sign-up Month, a time when the American Library Association (ALA) and libraries across the country remind library patrons that a library card is the smartest card you can own. Whether you’re a student heading back to school, a job seeker  looking for ways to increase your prospects or simply looking for free entertainment in these tough economic times; Berkeley Public Library is here to help. A library card gives you access to books and computers, databases, homework help, assistance with resumes and job searches, accurate financial information, adult education courses, music, movies, museum passes and more. To celebrate Library Card Sign-Up Month, the Berkeley Public Library will release four new library card designs and begin a poster and ad campaign.  The Read Local campaign will feature patrons, notable Bay Area residents, authors, and local business people who love to read and who want to inspire others to do the same.  The new library cards feature images from around Berkeley, including a painting featuring the Marin Circle Fountain by patron Cathy McAuliffe, the winner of the Design-A-Card contest. The new cards will be available and the posters will begin to appear in the library on Tuesday, September 4th.  New posters and ads in local media will appear for several months after. The cards will be available to all new patrons free of charge. Please join us in celebrating Library Card Sign-Up Month by visiting one of our branches or www.berkeleypubliclibrary.org and sign up for a library card today. 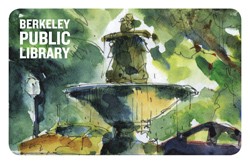 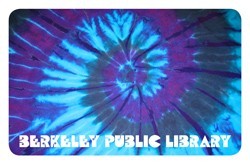 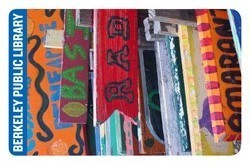