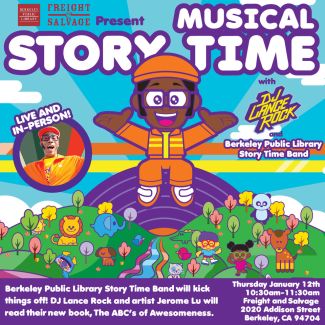 This week we're so excited for a special guest!

DJ Lance Rock of Yo Gabba Gabba, hit show on Nickelodeon, and Illustrator Jerome Lu will do a reading of his new children’s book The ABC’s of Awesomeness, with our Story Time Band kicking things off at 10:30am! Meet-and-greet will follow, and books will be available for sale.

Join us at the Freight & Salvage, one of Berkeley's oldest and most beloved music venues, for a special musical story time series with the Berkeley Public Library's Story Time Band. These FREE events will take place in January and February on Thursdays at 10:30 a.m. Each session will feature live music, movement activities, and read-aloud stories for children ages 2-6. See you there!

Lance Robertson is a Los Angeles-based musician, DJ, and actor also known as "DJ Lance Rock" on the award-winning Nick Jr show, Yo Gabba Gabba!. He has explored his interest in music (particularly electronic) through several internet radio shows, club DJ gigs, and live concerts. DJ Lance Rock is thrilled to have the opportunity to combine his love of music with providing interesting, educational entertainment for children and their families. He is currently working on a new DJ Lance Rock kids animated show.

In 2013, children's librarian Michael Kwende, known to Berkeley youth as Mr. Michael, and retired librarian and guitarist Tim DeWolf, began offering musical story time program at the Berkeley Public Library's Claremont Branch Library. Their events soon became so popular with children and their caregivers that it outgrew the library's programming space, required them secure a larger venue to accommodate their audiences. That place became Berkeley’s Bateman Mall park, and soon after, musicians and library specialists Juan Castille and Donovan Russell joined the effort and the Story Time Band was born. The band has since performed at parks throughout the city where 100+ people attend their weekly events. Over the years they have also visited several elementary school classes and libraries in the Berkeley Unified School District.