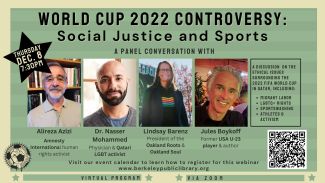 Please join us for a panel discussion on the ethical issues surrounding the 2022 FIFA World Cup in Qatar. We will explore broader patterns of global sportswashing and discuss how athletes and teams can be forces working toward social justice, locally and in solidarity with global struggles.

While the World Cup is often seen as a global celebration of sport and culture, and this tournament is the first to take place in the Middle East—at the same time, organizations such as Amnesty International and Human Rights Watch have documented troubling human rights issues in regards to migrant labor in the lead up to the tournament, and critics have been outspoken about Qatar’s record on women’s and LGBTQ+ rights.

We’ll be joined by Amnesty’s International’s country specialist for Qatar, Yemen, and UAE, Alireza Azizi, author of several books on the Olympic games and the politics of sport (and former USMNT soccer player), Jules Boykoff, publicly out LGBTQ+ Qatari physician, Dr. Nasser Mohammed, and  Lindsay Barenz, President of the Oakland Roots and Oakland Soul, for this critical, illuminating conversation.

Register for this webinar:
https://us02web.zoom.us/webinar/register/WN_vviWDnPtTnSdRTmNvvAkOg

Dr. Nas Mohamed is a primary care physician living in San Francisco. He is also an LGBT Asylum seeker from Qatar. Dr. Nas made international headlines in May 2022 when he came out publicly on BBC news, becoming the first Qatari to do so. Since coming out, doctor Nas was able to gather Qatari LGBT stories for documentaries and contributed to the very first country conditions report of LGBT Qataris by the Human Rights Watch. He founded Alwan Foundation, the very first LGBT nonprofit serving the Gulf region in the Middle East.

Lindsay Barenz is President of the Oakland Roots and Oakland Soul. In soccer, she previously worked for the Washington Spirit, the National Women’s Soccer League, and Real Salt Lake. She was a White House Fellow in the Office of Management and Budget during the Obama Administration. She has been a lawyer, entrepreneur, campaign manager, and union organizer. Lindsay is a graduate of Yale Law School and the University of Utah.

Jules Boykoff is the author of five books on the politics of sports mega-events, most recently, The 1936 Berlin Olympics: Race, Power, and Sportswashing (Common Ground, 2023), NOlympians: Inside the Fight Against Capitalist Mega-Sports in Los Angeles, Tokyo, and Beyond (Fernwood, 2020) and Power Games: A Political History of the Olympics (Verso, 2016). His writing on sports politics has appeared in places like the New York Times, the Los Angeles Times, the Guardian, the San Francisco Chronicle, and the Nation. He teaches political science at Pacific University in Oregon, and is a former US Men’s Under-23 soccer player.

Links & Resources for this webinar:

Event Category:
Special
Export to Calendar: Add this event to your calendar (iCal).