Home » Teens » Looking for something to read? » BPL Teens Recommend 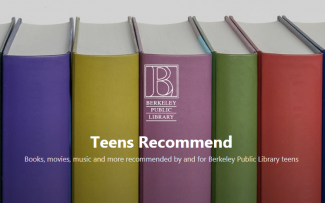 Some of the most recent reviews are featured here.

See all the reviews at BPLTeensRecommend.wordpress.com.

Then check them out from the library.

Do you have opinions about books, movies and music? Submit your own review!

Monthly Girls Nozaki-kun is my favorite comedy of all time. Pretty much every page makes me laugh. It’s about a high school manga artist and his friends and their trips on writing manga and coming up with ideas for manga. It’s kind of absurdist and each chapter starts out relatively normal but as they go on they get more ridiculous. There’s one early chapter where they’re trying to get around a law that says you can’t show illegal things in romance manga. For instance, it’s illegal to ride two people on one bicycle and they’re trying to get around that law while writing a bicycle scene. So they try experimenting in real life and see a tandem bicycle and decide “hey, let’s try this!” And they try it and it obviously doesn’t work but he eventually tries submitting it to his editor who tells him: that’s stupid, try again. And eventually he ends up doing that thing where they walk the bicycle in the scene. And there is a girl that likes him but he doesn’t know (he’s completely oblivious). And after all that she gets the tandem bicycle and is really excited because of the reactions everyone has to the manga. But no one else knows that it’s Nozaki-kun or anyone else that works on the manga. He tried telling his classmates but they just didn’t believe him since he writes super romantic shojo but is a completely oblivious guy.

Anyway, there are ten volumes so far and I’m sure there’s more coming. All the characters are great and I would recommend it to anyone who likes comedy and manga and romance.

H.S.: This book is amazing. It is a future where people can not die. They grow old but then there are machines that revert them to any age that they want. And when they get thrown off a building or hit by a car they are basically reborn. But there are scythes who basically regulate the amount of people in the world. Because otherwise overpopulation and so basically they just go around killing people and they have a quota. But there are different ways to kill people. You could poison them. You could kill them however way you want. It’s up to the scythes to choose. If I were a scythe, I could electrocute you to death. Or I could just rip out your organs. So basically the book is about two younger people who are taken in as apprentice scythes. But a scythe can only have one apprentice so eventually there’s a big thing.

Zoe: The world in this book is a dystopia disguised as a “utopia.” H.S. would you want to live in the Scythe?

HS: I totally would!

Zoe: Because the odds of being scythed are really low. But it would be terrifying being chosen. Can you imagine living forever/ And also there are so many ways you could die.

HS: The scythe could be just be like: “Hey, bear claws!

It’s very good. It is not scary. It is kind of intense I guess, but I wouldn’t say scary – not suspenseful and not gory. It’s a dystopian future book and I would recommend it to fans of The Giver like 13 and up.

Find Scythe at the library.

The movie that I will be reviewing today is Captain Marvel. I’m not going to spoil it or anything for those of you who didn’t see it, but it’s just so good. It portrays a woman being this really amazing person and it’s taught me a little something about how to be brave and stand up for yourself. It’s all about that and it’s just amazing to see her battle people; you guys really need to watch it. And it was weird because she’s actually the first avenger. It goes back in time and even though they didn’t explain it, I guess Marvel thought it was easier to go through the male characters first and then explain who the first avengers were. Even though she’s the first avenger, when the comics were first being written, they didn’t tell women’s stories so when I saw this I realized all along it was supposed to be a woman and now finally we can tell the truth about that. Because before the women would always be on the sidelines – like in Black Panther the sister was my favorite character but she was always on the sidelines. And it was just great to see a movie about this amazing empowered superhero. And I would recommend it to anyone who’s into superheroes.

Find Captain Marvel at the library.

✓  Retrieve holds via Outdoor Pickup. Note Winter Hours are in effect and Outdoor Pickup ends at 6pm. Social distancing practices are in place; face coverings are required for service.

Updates to Library Services will always be posted here. For additional details, read this FAQ.