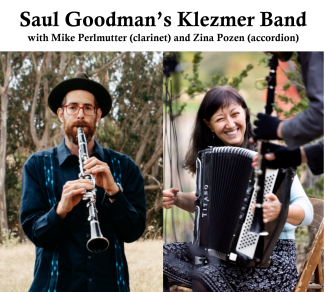 The Berkeley Public Library is happy to have Mike Perlmutter and Zina Pozen from Saul Goodman's Klezmer Band perform at the Central Branch on January 13th. Their sound draws from their modern cosmopolitan surroundings while being firmly rooted in traditional Jewish folk music tracing centuries back from Eastern Europe.  Their music “brings people together and lifts their spirits and energies”.  They strive to keep it "all good man" wherever they perform.

Mike Perlmutter has been performing klezmer, Balkan, and ceremonial Jewish music on saxophone and clarinet for over twenty years with groups such as Saul Goodman’s Klezmer Band, Inspector Gadje, Zoyres Eastern European Wild Ferment, and the Chochmat Halev Sacred Music Ensemble. He organizes periodic street music parties at Saul’s Deli in Berkeley, and has a long history of community music organizing, including serving four years on the Board of Directors for KlezCalifornia. Outside of music he's an environmental conservation professional and activist, pickler, gardener, bicyclist, swimmer, husband and father.

Originally from Ukraine, Zina Pozen grew up in a family of classical musicians, playing piano from a young age. In her house, salty Yiddish sayings, contraband Barry Sisters, Stravinsky and Poulenc, traditional Ukrainian and Moldovan tunes, Utyosov and Dunaevsky weaved their sounds together. After moving to the US, Zina fell under the spell of the Eastern European Folklife Center Balkan Music Camps and picked up the accordion to play traditional music. Zina plays klezmer, Moldovan, Ukrainian, Turkish, Armenian, Greek rebetiko, and other styles. She was a founding member of Seattle's infamous (and famously fun) Bucharest Drinking Team. In the Bay Area, she plays with Saul Goodman Klezmer Band, Orchestra Euphonos, Metanastys, Yeraz Ensemble, Cabin 19, Moonshine Jelly, Jonnie Pekelny and friends, and sits in with Balkan Sunday jams. Outside of music, Zina is a language technologist, training robots to help humans learn human languages

Event Category:
Just for fun
Export to Calendar: Add this event to your calendar (iCal).