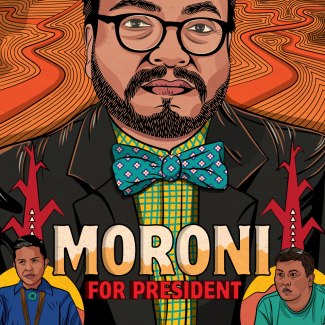 Celebrate Pride month by watching the film, Moroni for President.

"A compelling look at the LGBTQ community within the Navajo nation, and how
politics are navigated from a community being controlled by the outside..." -The Advocate

"'Moroni for President' shows that even a seemingly hopeless cause is worth fighting
for and in unexpected ways can succeed..." -The Boston Globe

Moroni Benally is running for the presidency of the Navajo Nation, the largest Native American nation in the US. Young, gay, Mormon, and highly educated, he sets out to confront the political establishment in a homecoming that challenges what he imagined home, and himself, to be.

The Navajo Nation is the largest Native American reservation in the United States. Every four years, the Navajo tribe elects its president, whom many consider the most powerful Native American in the country. In the midst of a frenzied election to determine the next President of the tribe, Moroni for President takes the audience to every corner of this vast area in the iconic American Southwest. The film centers on Moroni Benally, an underdog candidate with radical ideas, whose homespun campaign originated out of frustration about the lack of progress in the reservation where he grew up. The witty academic embarks on a grueling, lonely campaign, discovering soon enough that theory does not necessarily prepare you for the daily dirt of politics.

About the Filmmakers
Jasper Rischen is a documentary filmmaker and photographer originally from The Netherlands, now based in Los Angeles. He recently shot a new documentary project in the Republic of Congo and is directing a 10-part docuseries following a world tour of stars from RuPaul’s Drag Race. Jasper graduated with high honors from Columbia University’s Graduate School of Journalism in 2015, winning a Pulitzer grant awarded to top students, as well as the Henry N. Taylor Award for best foreign student and a DuPont/Judy F. Crichton Award for best thesis film.

Saila Huusko is a documentary filmmaker and journalist. For three years she was the in-house filmmaker for the conflict resolution NGO founded by Nobel Peace Prize Laureate Martti Ahtisaari. While there, she worked around the world, including in South Sudan and Afghanistan. Saila graduated with honors from the Columbia Journalism School and earned her BA from Middlebury College. She was a Rotary Peace Fellow at the University of Queensland in Australia. She recently directed READING NORTH for Al Jazeera’s Witness documentary strand.